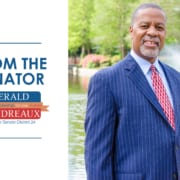 The Senate Select Committee on Military and Veterans Affairs held its first meeting and began hearing from state agencies on the challenges facing the state’s veterans and military personnel and the programs available to assist them. The committee, chaired by Senator Gerald Boudreaux (D-Lafayette), kicked off its meeting by broadening its name.

“This meeting is the committee’s first step in taking a more active role in all things concerning veterans and active military personnel,” said Chairman Boudreaux. “I want to thank President Cortez and Senator Reese for their role in making the change. We are sincere and serious about the providing the best resources available to our state heroes. We are here for you.”

The Select Committee on Military and Veterans is tasked with providing recommendations and direction concerning Louisiana veterans and military issues to the Louisiana Senate. It is composed of seven members – Chairman Boudreaux and Senators Reese, Carter, Cathey, Foil, Milligan, and Tarver.

“Our veterans and servicemen and women are the pride of our nation and state,” said Senator Reese. “It is the goal of this committee to ensure that each and everyone one of them have access to everything they need to lead healthy, happy, and successful lives.”

Members of the committee received an overview from the Department of Veterans, as well as Louisiana Economic Development, on available programs, ongoing challenges and upcoming events. A summary of the Senate’s Military Family Day event was also provided to the committee.

Paving the Way for a Healthier Louisiana Martin Luther King, Jr. Day Activities Suspended
Scroll to top
Join my Email List
Your information will *never* be shared or sold to a 3rd party.